More details of Rampside church can be found here 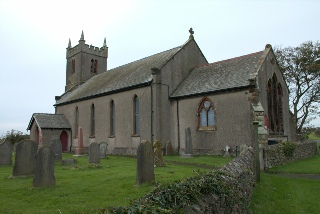 St. Michael’s church Rampside stands on the Cistercian Way the path that the monks of Furness Abbey travelled from Piel Island to Furness Abbey.  Now part of.  We are walking the same path as those ancient pilgrims.

It is surprising there are no homes nearby at all, but the church is in the geographic centre of the Anglican parish.  Even if most of the people live in the village ½ a mile away.  Never the less a place of worship has been here since before 1292 when a chapel was built by the monks from Furness Abbey.  Tradition has it that it is even older being built on the site of an ancient barrow.

The church has been re-built a few times in the intervening centuries the latest incarnation the present building dating from 1840.  About the time the town on Barrow was growing to become an industrial centre.

One interesting fact – as a sea side parish there are a number of seamen who drowned at sea buried in the church yard.

It remains a centre of worship for the framing community and the village of Rampside to this day.

St Michael’s church at Rampside lies on the Cistercian Way a 20 mile historic trail from Piel Island to Canal Foot in Ulverston that celebrates the path the monks of Furness Abbey trod.